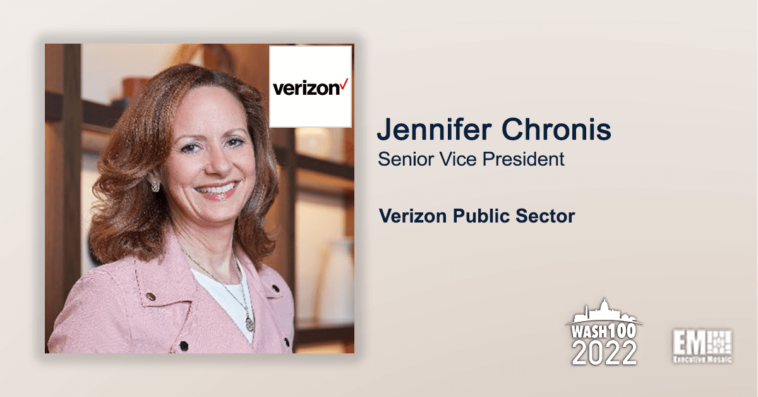 Executive Mosaic is honored to introduce Jennifer Chronis, senior vice president of public sector business at Verizon, as an inductee into the 2022 Wash100 Award, the most respected award in all of government contracting (GovCon), for her leadership and push for innovation for federal agencies to modernize their network and platform capabilities and drive for company growth.

Don’t forget to cast your TEN votes for Chronis and your other favorite executives in the federal sector on Wash100.com, where you can also learn more about the history of the award and its latest class of winners.

In April 2021, Chronis was promoted from VP of federal to SVP of public sector at Verizon less than a year after joining the company, bringing to the role over 25 years of experience advancing digital transformation for federal civilian and defense agency customers.

“Verizon Public Sector is uniquely positioned to deliver the technology and solutions that meet the new challenges the public sector faces — from keeping K through 12 students connected while learning remotely, and Verizon Frontline – the network and technology platform built from the ground-up for first responders, to our ongoing partnerships with the U.S. Department of Defense to deliver Verizon 5G for our nation’s military, and so much more,” Chronis said at the time of her promotion.

“Investments across Verizon’s enterprise business enable the kind of tailored solutions our team will deliver to the U.S. Department of Defense and the Defense Research and Engineering Network,” she said then. “Our managed services solutions will create a next-generation user experience for research teams utilizing the DREN platform while also enhancing security across the network.”

Verizon was one of the companies that won a spot on the General Services Administration’s $50 billion Enterprise Infrastructure Services contract for telecommunications support in 2017. In 2021, the company received several task orders on EIS and one of those was a $79 million task order from DOD to provide network modernization support services for the Air National Guard’s readiness center. Chronis said the company’s managed services are designed to support ANG’s effort to modernize and adopt IP-enabled voice services.

“This award enables the Verizon Public Sector team to build on the innovative work we’ve been performing throughout DoD and the Air National Guard, helping our customers transition legacy enterprise networks into forward-looking platforms that utilize Verizon’s next-generation technologies,” she added.

“Our next-generation technology and modernized network services are helping to transform the way DOL serves their constituents, today and into the future,” she added.

A month later, Verizon received a $78 million EIS task order to serve as a technology partner for Naval District Washington. Under the award, the company will transition the agency’s Time Division Multiplexing voice platform to an Internet Protocol Voice Service.

“This award builds on our recent wins with the U.S. Department of Defense and U.S. Department of Labor, and serves as another example of how Verizon is the market leader when it comes to public sector digital transformation,” Chronis said.

Verizon is also advancing 5G adoption in the military. In June 2021, Verizon and Robotic Research partnered to demonstrate the joint application of a 5G wireless network and a data collection system for an autonomous shuttle pilot program at Marine Corps Air Station Miramar in San Diego.

“Leaders across the Department of Defense understand the mission-critical role 5G plays in unlocking innovation for the military, and strategic partners like Robotic Research are bringing to life some of the exciting technologies that are possible when you integrate 5G,” said Chronis.

Chronis noted that supporting the U.S. military in their pursuit of strategic digital transformation objectives is one of Verizon’s “highest priorities.”

“Air Force leadership describes their modernization as a transition from an industrial-age force to an information-age force and Verizon Public Sector is their partner in that journey, providing a 5G network with the right technology solutions to meet their needs today, and into the future,” she added.

“There is no greater joy at this time of year than to join our partners at NORAD to bring the magical Santa tracking tradition to life,” said Chronis. “The Verizon elves are honored to provide the nation’s most reliable network on which NORAD can track Santa for millions of children again this year.”

Prior to joining Verizon in 2020, Chronis worked at Amazon Web Services where she supported DOD’s cloud adoption efforts. She also served at IBM for more than eight years, holding several federal civilian and defense leadership roles at the company. Chronis is a retired U.S. Army lieutenant colonel who served for over two decades with the military branch. 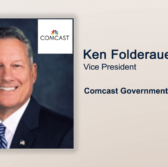